Our exhibition weekend Through Alice’s Eyes brought over 500 visitors to the Birchcliffe Centre over the May long weekend. The exhibition featured 40 of Longstaff’s most iconic images, most of which have never been shown to the public before. Visitors also heard the only surviving interview with Alice Longstaff, conducted in 1984, in which she shares memories from her childhood, how she became a photographer, and her 70-year career.

Longstaff’s photographs document life in and around Hebden Bridge from 1921, when she became an apprentice at Westerman’s Studio, until her death in 1992. These photographs combine Longstaff’s incredible artistic vision and technical skill with fascinating social history. The negatives were inherited by Pennine Heritage without any additional information, so the exhibition had the additional purpose of gathering information on the people and places featured. Most of the prints shown in this exhibition were from the 1950s and 60s, so long-time residents of the area were able to identify some of the people featured – keep an eye on our social media pages to learn the identities of some of these persons of interest! 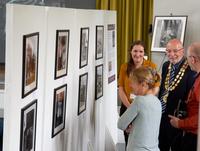 On the final day of the exhibition we welcomed Hebden Royd Town Council’s Mayor Rob Freeth, and his Consort Helen Freeth, who were given a special tour by the staff and volunteers who created the exhibition. After two years of closures and cancellations, we were delighted by the excellent turnout and positive feedback.